Titre / Title : Teleny or The Reverse of the Medal

Notes : About the authorship of Teleny: "A French bookseller, Charles Hirsch, who operated the Librairie Parisienne in London, became aware of the manuscript since through his offices, it passed to various friends of Oscar Wilde. Hirsch noted various handwritings, erasures and corrections which led him to conclude that the work was a combined effort of a number of writers. In his opinion, Oscar Wilde supervised and corrected the manuscript." Source : Wikipedia.

Résumé / Summary : The story begins with Des Grieux attending a concert with his mother; he experiences strange and suggestive visions during one piano performance – by the beautiful foreigner, Teleny. Des Grieux becomes fascinated by the man and by the sporadically and frequently sexual telepathic connection he feels with Teleny, and this feeling becomes a mixture of curiosity, admiration, and desire, which quickly leads to jealousy. Des Grieux knows that Teleny attracts many men and women before their relationship begins. Eventually they meet and share their experiences of their unexplained bound which quickly leads to a passionate affair. Des Grieux feels very torn about loving and desiring a man and attempts to genuinely sexually interest himself in a household servant, but in so doing indirectly leads to her death. Thusly shaken, he vows not to fight his feelings and allows Teleny to introduce him to an underground sexual society of male desiring men. Their love continues through a blackmailing attempt and their emotional struggles, until Teleny declares a need to leave for a time, ostensibly for a concert performance. During this time Des Grieux goes to Teleny's apartments only to find Teleny in bed with Des Grieux's mother, who had offered to pay Teleny's debts in return for sexual favours. The two part badly; Des Grieux nearly commits suicide and remains isolated in the hospital for many days. When he leaves he goes to Teleny only to find that his lover has stabbed himself in remorse, and is bleeding to death. Des Grieux forgives Teleny; they re-declare their love, and Teleny dies. Source : Wikipedia. 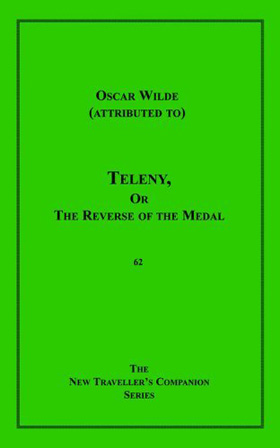